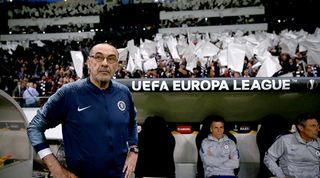 The story, by now, is a fairly familiar one. A new manager arrives and tries to impose a style of football that fans don’t like; one that clashes with the club’s perceived traditions. As results go south, friction turns to hostility and before long the terraces are ringing with calls for the manager’s head. In the last decade alone, we’ve witnessed it happen with Roy Hodgson at Liverpool, David Moyes at Manchester United and Sam Allardyce at... well, pretty much everywhere he’s gone.

In some ways, then, Maurizio Sarri – whose vain attempts to convince the Stamford Bridge faithful about the merits of “Sarriball” have made for one of the season’s stranger subplots – is following a well-trodden path. But in another sense, Sarri’s case is the exact opposite of the above managers, who were all met with opposition due to their agricultural, unpolished brand of football. The Italian's approach, by contrast, is elaborate, technical and fundamentally possession-based.

All of which made the chants of “Fuck Sarriball”, which echoed around Stamford Bridge in the early months of 2019, as intriguing as they were aggressive. Many a club’s fanbase views attacking, pass-and-move football as a sacred part of their heritage. But are Chelsea the first modern heavyweight to lay claim to the opposite? Do Chelsea supporters – who enjoyed their greatest days under Jose Mourinho – actually see no-frills, long-ball football as the “Chelsea way”?

It’s certainly hard to recall another instance of supporters actively taking against an ostensibly progressive style with such vigour. The nearest recent precedent is probably Old Trafford’s impatience with Louis van Gaal – but even then, the irritation never spilled over into anything approaching the sort of open mutiny on show in west London.

Both instances point to an interesting contradiction in a sport where a coach’s style is increasingly important, and where results are no longer the be-all and end-all for their job prospects. Namely that “progressive” football can be boring too. You only need to have sat through some of the more plodding, shot-shy displays of Sarri’s Chelsea or Van Gaal’s United to have been presented with a fine case in the aesthetic merits of route one.

Perhaps it’s no coincidence that it's at a club whose modern incarnation has been founded on the notion of managerial short-termism – and with spectacular success – where the fans seem uniquely unconvinced by a manager’s long-term vision. For the author and Chelsea fan Mark Worrall, though, hostility towards Sarriball was borne of several grievances, not all of them aesthetic.

“Chelsea fans like a bit of King’s Road style and swagger about their managers,” says Worrall. “Conte and Mourinho won early support because they looked and acted the part. Sarri is a tracksuit coach, which is fair enough, but he never made any kind of effort to open up to the crowd.”

“Playing N’Golo Kante, the world’s best defensive midfielder, out of position became a huge bone of contention, as did his persistence with Marcos Alonso. Throw in his predictable changes, reluctance to give Ruben Loftus-Cheek and Callum Hudson-Odoi adequate game time and crushing defeats at Manchester City (6-0) and Bournemouth (4-0), and the ‘fuck Sarriball’ flare-up – which ignited during the 2-0 home loss to the worst Man United side in 45 years – was a boiling over of fans’ frustration.”

But that was then. While Sarri’s inaugural season hit its nadir during that defeat to United, there has been a quiet resurgence in the three months since. The football has been more incisive, Eden Hazard has hit some of the best form of his career and, having spent much of the spring in a frantic scramble for the top four, Chelsea finished the season in lofty third. Amid it all, an uneasy peace has broken out between the touchline and terraces: if the Chelsea fans are still some way from being full-on Sarriball converts, nor are they the vocal dissenters of a few months ago.

It could all be capped with silverware if Sarri’s men emerge triumphant from next week’s Europa League final. In theory, then, Wednesday’s showdown in Baku could serve as something of a referendum on Sarriball: might a win – who knows, maybe even an exciting one – be enough to tilt public support in the manager’s favour?

For Worrall, though, any such approval will only be temporary. “The anger dissipated with a modest upturn in results, youngsters featuring more regularly and also the realisation that Sarri won’t be around for the long-term — Chelsea managers never are,” he says. “Today the reality is that Sarri is now widely seen as a placeholder for Frank Lampard, whose maiden season at Derby has shown all the qualities Chelsea fans were hopeful of. The writing seems to be on the wall.”

Judging by reports emanating from Turin this week, Chelsea fans might well get their wish as early as this summer.

Or maybe – just maybe – Sarri will render all of that redundant and plant himself at Stamford Bridge for the long haul. The fans might even thank him for it in the end. Because if every manager is little more than a sacking waiting to happen, what’s the point getting excited about the next one?