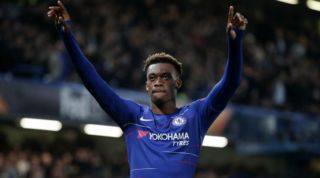 Callum Hudson-Odoi insists he is happy at Chelsea but did consider leaving for Bayern Munich last year.

The Bundesliga giants submitted four bids for the teenage winger last January, when Hudson-Odoi was still on the fringes of the first-team squad at Stamford Bridge.

Chelsea rejected Bayern's advances and sought to convince Hudson-Odoi that he had a future at the club, but the player himself has now admitted that he was tempted by a move to the Allianz Arena.

"I was talking about it with the family and thinking, ‘I just want to play games,’ and at that moment I wasn’t playing enough,” he told The Sun.

“I wouldn’t say I was close to leaving but it was on my mind. What happened in January happened. But I signed my contract and I’m happy here now —  everything is going well.

“It’s been a rollercoaster year. A lot of things have happened which made me learn and think about stuff. I just needed to get back, be confident, be myself, score, assist — and show what I can do.”

Hudson-Odoi remained in west London but then injured his Achilles in April, a setback which delayed his start to the season.

And the England international, who has made 13 Premier League appearances this term, says he learned a lot in 2019.

“I’d say I’m grateful - I feel fortunate with what has happened,” he added. “The injury is an experience that you learn from because I didn’t know about these things before.

“It happened to me for the first time. And the transfer request taught me about that kind of situation.

“The England thing [making his first-team bow against the Czech Republic in March], the Champions League debut, and a change of manager has taught me a lot. So I would say ‘experienced’ is the word.

"I’m much more mature now, it’s made me wiser. It makes me think everything has happened for a reason - so I should be grateful and give thanks to God.

“There are times when I sit back and think to myself what a crazy 12 months it has been. Good or bad, everything happens for a reason. So you have always got to be grateful.”