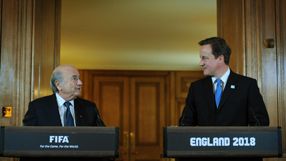 Cameron is intensifying his efforts to back the bid, talking it up during meetings with world leaders at the G20 summit he is attending in South Korea.

"The prime minister wants to offer the strongest possible support for what he thinks is an excellent bid," his spokesman told reporters.

FIFA's executive committee will select the hosts of both the 2018 and 2022 World Cups at a two-day meeting in Zurich, finishing on December 2.

Cameron held a 30-minute meeting with Chung Mong-joon, FIFA vice-president and president of Korea's FA, at the British ambassador's residence on Thursday.

Cameron joked that he was spending more time on the World Cup than on core G20 issues at the summit.

The prime minister is arguing that England already has world-class stadiums in place, reducing the costs involved at a time of sharp public spending cuts.

England last hosted the World Cup in 1966, winning the tournament for the only time, and staging the event again would be a morale boost for English fans.

Cameron told Russian President Dmitry Medvedev that he looked forward to a "good, clean fight" when the issue of their rival bids came up at a bilateral meeting on Thursday.

Two FIFA executive committee members, who deny wrongdoing, have been suspended while FIFA investigates allegations in the Sunday Times newspaper that they offered to sell their votes.

There is speculation FIFA is unhappy with the level of scrutiny it has faced in the British press and that England's bid could suffer as a result of the newspaper reports.

Britain has already been chosen to host the 2012 Olympics, their winning bid boosted by strong backing from then Prime Minister Tony Blair during the campaign.