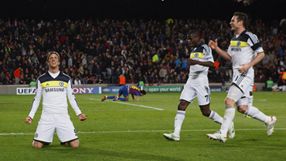 Playing with 10 men for two-thirds of the game after a moment of madness by captain John Terry, they survived a siege by the Catalans before 50-million-pound striker Fernando Torres, a native of Madrid, made up for months of failure with a late goal to seal a 2-2 draw on the night and an unlikely 3-2 aggregate victory.

Such were the heroics of Chelsea's patched-up defence and Barca's obsession with trying to tiki-taka their way through a wall of white, that Torres's goal was not actually required as his side were already edging through on away goals.

British newspapers plastered Torres's beaming face all over their back pages on Wednesday under headlines such as 'Magnifico' and 'Miracle Men'.

On the night, however, it was a sublime goal on the stroke of halftime from Ramires, just after Barca had gone 2-0 ahead, that proved pivotal.

The goal allowed Chelsea, playing in a kit not unlike the white of Real Madrid, to revert to a trench-warfare mentality that had served them so well.

Torres's breakaway goal, after he came on as a substitute, capped a night of enthralling drama that was all too much for Sky Sports commentator Gary Neville, part of the Manchester United side that snatched victory from the jaws of defeat to beat Bayern Munich in the Champions League final on another epic Nou Camp night.

As Torres galloped clear with no Barca defender in sight in the 90th minute before rounding Victor Valdes to score, former England defender Neville sounded close to meltdown, shrieking a prolonged "ahhhhhooo" before yelling a series of "unbelievables" into his microphone. He was not overstating it.

After a season that has threatened to be one of the worst in recent memory for Chelsea and was predicted to be the last for many of the club's old guard such as Didier Drogba and Frank Lampard, the club are now one win from greatness.

If they are to beat Bayern or Real Madrid on May 19 they will have to do it without Terry, whose knee into the back of Alexis Sanchez earned him a red card.

They will also be without right-back Branislav Ivanovic, booked for dissent after Lionel Messi missed a second-half penalty for Barca, and midfielders Raul Meireles and Ramires, all of whom fought like lions.

Such has been Lady Luck's influence on Chelsea's season since Andre Villas-Boas was sacked by owner Roman Abramovich and replaced by caretaker coach Roberto Di Matteo, that they could probably field the kit manager and the tea lady in Munich and still have a chance of winning the trophy for the first time.

Abramovich has hired the game's highest-profile coaches to deliver silverware, with varying degrees of success, but bizarrely it is stop-gap Di Matteo who may hold the key to the Champions League trophy the Russian billionaire craves most.

Di Matteo's first Champions League game in charge was the quarter-final second leg at home to Napoli when his side trailed 3-1 from the first leg. Chelsea took the second leg into extra time and won 4-1 to go through.