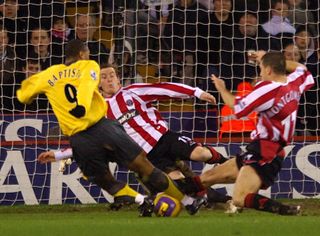 Sheffield United will aim to continue their city’s stranglehold over Arsenal when they host the Gunners at Bramall Lane on Monday evening.

Arsenal fans have to go back into the archives since they last recorded a Premier League victory in the city of Sheffield, when Ian Wright’s eighth-minute goal proved enough against Sheffield Wednesday in August 1993.

The Gunners take on Chris Wilder’s Blades in search of three points which will keep their top-four aspirations on track and end a barren run of eight league matches without a win in the Steel City.

Here, the PA news agency looks back at Arsenal’s struggles in South Yorkshire.

Arsenal began their poor streak in Sheffield with a draw at Bramall Lane. The relegation-battling hosts took the lead nine minutes after the restart through Paul Rogers but Arsenal earned a point through Kevin Campbell’s effort in the 69th minute. The Blades went down at the end of the 1993-94 season, trailing Ipswich by one point, while George Graham’s Gunners finished the campaign in fourth.

Arsenal made a fast start at Hillsborough when Andy Linighan headed home Ian Selley’s corner in the third minute. But Wednesday were level five minutes later through Dan Petrescu before Klas Ingesson latched on to a deflected Chris Waddle shot to poke the hosts into the lead. Things got worse for Arsenal as captain Tony Adams and new signing John Hartson were both dismissed in the second half before Mark Bright sealed the win for the Owls.

Marc Degryse scored the winner against @Arsenal on this day in 1996 at Hillsborough #swfcpic.twitter.com/tSp8iNQrdu— Sheffield Wednesday (@swfc) April 8, 2015

Wednesday extended their fine home league record against Arsenal with a 1-0 win at Hillsborough. Ian Wright’s winner in August 1993 remained the only time the Gunners tasted victory in the league since 1969, thanks to Marc Degryse’s 61st-minute winner. Guy Whittingham jinked his way past the Arsenal defence from the right wing before laying off for the Belgian on the edge of the area to drill home.

David Pleat’s second season in charge saw Sheffield Wednesday finish the campaign in seventh place, with this goalless draw coming during their terrific 12-match unbeaten league run. Arsenal went on to finish third in the table.

Ron Atkinson begun his tenure as Wednesday boss with victory after replacing caretaker manager Peter Shreeves. Atkinson’s side got off to a fine start, breaking the deadlock three minutes before half-time when Andy Booth capitalised on a slack pass to slot under David Seaman. Whittingham wrapped up the three points when he sidefooted home Benito Carbone’s through-ball following a quick counter-attack to down Arsene Wenger’s outfit.

This match is one of the most memorable games in Premier League history for all the wrong reasons. A tussle broke out between both sets off players after Patrick Vieira took exception to a Wim Jonk challenge, with Paolo Di Canio confronting the French midfielder for his reaction. But Martin Keown caught the Italian as he tried to defuse the situation, with Di Canio kicking the defender which saw both players grapple one another. The pair were dismissed as a result, but Di Canio reacted by pushing referee Paul Alcock to the ground. Lee Briscoe scored a superb 89th-minute winner, but Di Canio’s actions and the 11-match ban which followed still remain the talking points of the match.

Arsenal were on the hunt to dethrone Manchester United’s treble-winning side and secure their first league win at Sheffield Wednesday in seven years. They looked on their way to finally ending their horror run at Hillsborough when Thierry Henry set up Emmanuel Petit to prod home in the 40th minute, but Gerald Sibon earned the hosts a point with a towering header in the second half. It remains the most recent league clash in Sheffield between the two teams following Wednesday’s relegation at the end of the campaign.

The most recent clash between Arsenal and Sheffield United came at Bramall Lane 13 years ago, with Neil Warnock in charge of the Blades. Christian Nade grabbed the only goal of the match when he turned Kolo Toure inside the Arsenal half before sliding the ball past an onrushing Jens Lehmann from just outside the area. The drama did not stop there as home goalkeeper Paddy Kenny picked up a groin injury and, with no replacement on the bench, Phil Jagielka donned the gloves for the final 29 minutes of the match. He managed to pull off a fine save to deny Robin Van Persie as United held on for the famous win.