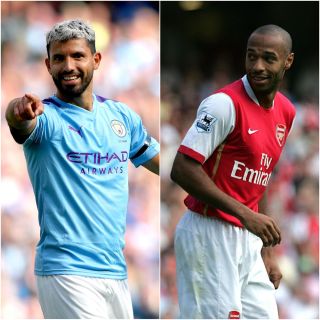 Sergio Aguero goes into Sunday’s game against Aston Villa on the verge of a piece of Premier League history.

The Manchester City striker is just one goal behind Thierry Henry’s record as the leading overseas scorer in the competition’s history.

Aguero has scored 174 in 254 league games for City – an identical record to Henry in his first spell with the Gunners from 1999 to 2007, before the Frenchman added one more in a four-game comeback in 2012.

And the presence of Villa as this weekend’s opponents offers real hope of Aguero breaking the record as he has scored six Premier League goals against them previously.

Those strikes have come in only six appearances, one of which was as a 76th-minute substitute earlier this season.

In addition, according to statistics on the Premier League’s official website, no player has more goals against promoted teams than the Argentinian’s 31 since he joined the league in 2011.

Henry and Aguero lie fifth and sixth respectively in the all-time Premier League goalscoring chart – a hat-trick against Villa would be enough to lift Aguero to a share of fourth with current Chelsea manager Frank Lampard on 177.

Former Newcastle, Manchester United and City striker Andy Cole would be the next name on his hit list on 187, with Wayne Rooney scoring 208 and Alan Shearer a record 260.

Ex-Arsenal and United striker Robin Van Persie is the third-ranked international goalscorer with 144.

Fellow Dutchman Jimmy Floyd Hasselbaink is next on 127, just ahead of long-time Republic of Ireland star Robbie Keane (126) and much-travelled pair Nicolas Anelka (125) and Dwight Yorke (123).

Romelu Lukaku’s summer departure from Manchester United to Inter Milan means that after Aguero, there is no active Premier League overseas player with 100 goals in the competition – Chelsea’s Olivier Giroud is next on 78.