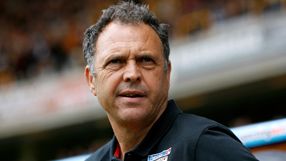 Jose Mourinho's unbeaten Real side lead La Liga by a point from champions Barca after 11 matches and will be bidding for a seventh consecutive win when they play Athletic at the Bernabeu.

In Saturday's earlier kick-offs, Barca, who host arch-rivals Real on November 29, visit struggling Almeria and third-placed Villarreal are at home to Valencia in fourth.

Caparros told Marca sports daily published on Thursday that Real would be very hard to beat but said his players would try to defend solidly and hope to convert at least one chance to score.

"A team of professionals does not succumb to that," Caparros told Marca when asked if Athletic's job would be easier as Real might have half an eye on the "Clasico".

"It's more of an external issue than what the squad will be experiencing," he added.

"A Barcelona-Madrid or vice versa gets more and more media attention and takes up all the space but this is a different story. The soccer player is prepared and focused on the next match he is playing."

Barca have never lost in five visits to Almeria on Spain's southern Mediterranean coast but have also been held to three draws, including a 2-2 stalemate last season when Lionel Messi scored both goals, striker Zlatan Ibrahimovic was sent off and coach Pep Guardiola was dismissed from the bench.

Barca's crop of Spain internationals, including midfielders Xavi and Andres Iniesta and central defenders Carles Puyol and Gerard Pique, will have to pick themselves up after Wednesday's 4-0 drubbing in Portugal.

Coach Vicente del Bosque withdrew Pique at halftime in Lisbon as a precaution after the defender felt a twinge in his hamstring.

Argentina forward Messi had a more successful stint on international duty, scoring the winning goal in his country's 1-0 victory over Brazil in Doha.

Messi has 10 league goals this season, one short of top marksman Cristiano Ronaldo of Real Madrid.