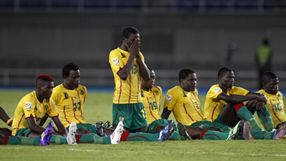 A country with a population of 500,000 pulled off one of the biggest shocks in the competition's history with their 3-2 aggregate triumph after winning the first leg at home 2-0 last month.

Cape Verde had expected a rampant response from Cameroon's Indomitable Lions in Sunday's return but were met instead with a nervy and muted showing, allowing them to extend their aggregate lead 22 minutes into the game with a free-kick from Portuguese-based striker Heldon.

Cameroon were back level minutes later through Achille Emana but still needed three more goals to overturn the deficit, a task that seemed beyond their dispirited performance.

The hosts got their second goal four minutes into stoppage when 16-year-old substitute Fabrice Olinga came on to score at the end of a cross from Samuel Eto'o.

The return of four-times African Footballer of the Year Eto'o and a change of coach ahead of the second leg did little to resurrect Cameroon's fortunes.

They now miss out on the Nations Cup for a second successive tournament, suggesting the era of a regular role as one of African football's superpowers is at an end.

Cape Verde, with a team drawn from their extensive diaspora in Europe, toyed at times with their much-vaunted hosts, passing the ball around at pedestrian pace in the second half to waste time.