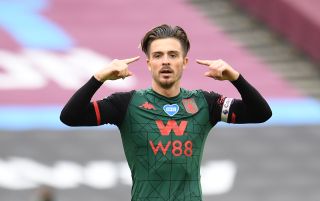 Captain Jack Grealish has signed a new five-year deal at Aston Villa to end speculation over his future.

The midfielder had been heavily linked to Manchester United last season but has now committed himself to the club until 2025.

He helped Villa survive in the Premier League last season as they beat the drop by a point on the final day.

He told the club’s official site: “I am delighted to make this commitment to Villa. It is my club, my home and I am very happy here.

“The owners have made it very clear to me how ambitious they are and how they want to build Aston Villa.  There are exciting times ahead and I am very glad to be part of it.”

Grealish, 25, scored 10 goals in 41 games last term and earned his England debut in this month’s 0-0 Nations League draw in Denmark.

He has been with the club since he was eight years old, making his debut in 2014.

Chief executive Christian Purslow said: “Jack is an emblem of our owners’ vision for Aston Villa. He joined our club as a local boy and has developed into one of the country’s finest players, finally becoming a full England international last week.

“We are determined to build a top team around him and are delighted that he is extending his contract and committing himself to the club he loves.”

Villa are also expected to tie up a £20million deal for Arsenal goalkeeper Emi Martinez soon after he agreed a four-year deal over the weekend.

Ahead of their Carabao Cup match at Burton, Villa boss Dean Smith said it was a “big boost” to get Grealish’s deal over the line.

“I’m really pleased. Not just as a head coach but as an Aston Villa fan as well,” he said.

“I think it’s a statement of intent from the owners, where we want to move to as a football club.

“He’s been courted and speculated on. We know what a tremendous talent he is and how well he’s done for Aston Villa last season, how integral he was in helping us maintaining our Premier League status.

“For him to commit his future to Aston Villa for the next five years is a big coup for the football club and it shows that we’re aiming to move in the right direction.”