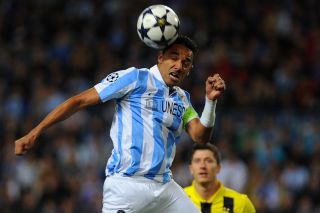 The defender, who joined permanently from Grasshoppers in 2008 after spending a campaign on loan at La Rosaleda, is in his seventh season with the Liga club.

Weligton, 34, has spent all of this term on the sidelines due to a fractured collarbone following a collision with Aston Villa's Christian Benteke during a pre-season friendly.

The centre-back has the option to extend his deal for a further two seasons and will look to repay the club's faith in him when he makes his return from injury.

Still, they will hope that their skipper's prospective comeback, which is expected in the coming days, will help them to turn their form around following a start that has seen them win just two games thus far.

Weligton has made over 200 appearances for Malaga since his initial loan move in 2007-08, when he helped them secure promotion to La Liga.