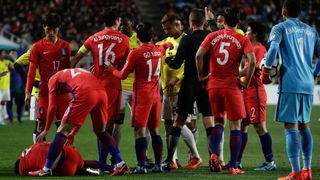 Colombia midfielder Edwin Cardona has denied allegations of racism and apologised for his controversial gesture in Friday's friendly loss against South Korea.

The incident occurred in the second half of Colombia's 2-1 defeat in Suwon when a confrontation flared up following a clash involving James Rodriguez and Kim Jin-su.

Substitute Cardona made a gesture with his eyes at Korea players as officials tried to calm the situation, with Ki Sung-yueng calling the behaviour "absolutely unacceptable" after the match.

However, in a video posted on the Colombia team's official Twitter account, the Boca Juniors star insisted he had not meant to offend anyone.

"It was not my intention to disrespect anyone, any country or any race, but if someone was offended, or interpreted it that way, I apologise," Cardona said.

"We are grateful to the people of Korea for how they have treated us.

"I am not a contentious person and I regret that a situation in the match has been taken this way."

Cardona has travelled with the squad to China for another friendly on Tuesday, but James and Cristian Zapata have been allowed to return to Bayern Munich and AC Milan respectively.