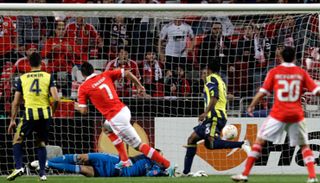 Top scorer Cardozo, who signed a new deal in January and has a 60 million euros buyout clause in his contract, proved too hot to handle after Dirk Kuyt's away goal had given Fenerbahce the upper hand.

APP:Europa League stats on Benfica 3-1 Fenerbahce at your fingertips with Stats Zone

Benfica, last in a continental final in 1990 when the Portuguese lost to AC Milan in the European Cup showpiece, took just nine minutes to cancel out Fenerbahce's 1-0 lead from the first leg when Nicolas Gaitan clipped in Lima's low cross.

The hosts were then stunned when Kuyt levelled midway through the half from the penalty spot after Ezequiel Garay handled, meaning Benfica needed to score at least twice more.

Cardozo's fine left-foot finish restored Benfica's lead on 35 minutes in a breathless first half and his decisive strike came on 66 with another crisp low shot from inside the area.

The final is in Amsterdam on May 15 when Benfica will have the chance to win their first European trophy since lifting the second of their successive European Cups in 1962.

"This is historic given the last time Benfica got to a European final and we get there with all justice," Benfica coach Jorge Jesus told Portuguese television.

"Our dynamic was stronger, pace higher and we managed to keep it throughout the match because we kept the ball. They scored from a penalty but never really created a lot of problems."

Benfica, chasing a memorable treble consisting of a Portuguese league and cup double and the Europa League, were rewarded for their positive start when Gaitan, who was rested for the first leg, deftly finished with the outside of his left foot.

Fenerbahce had struggled to stem the early onslaught but got an unexpected gift when the ball struck Garay's arm as he tried to clear and Kuyt coolly converted from the spot.

Benfica were back in front 10 minutes before the break when a quickly-taken free-kick found Cardozo and the Paraguayan turned and fired past Volkan Demirel.

The game was held up for a few minutes early in the second half when Fenerbahce defender Gokhan Gonul needed lengthy treatment after he was caught in the face accidentally by a flailing leg from Gaitan. Gonul was carried off on a stretcher.

Cardozo put Benfica in the driving seat when Lusiao's shot fell into his path and the striker fired into the corner.

Since the Europa League was rebranded in 2009/10, only Atletico Madrid striker Radamel Falcao, with 30, has scored more goals in the competition than Cardozo who has 19.

Benfica defender Maxi Pereira will miss the final after a yellow card in the first half ruled him out through suspension.