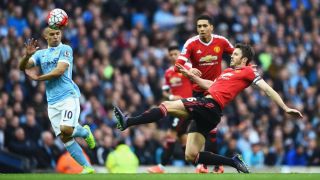 Michael Carrick is expecting a typically feisty encounter when Manchester United meet rivals Manchester City in a friendly in China later this month.

The Red Devils have two International Champions Cup fixtures in the Far East, facing Borussia Dortmund and then City.

And veteran midfielder Carrick is expecting a lively affair between the two Manchester clubs - no doubt aggravated by the respective arrivals of managerial rivals Jose Mourinho and Pep Guardiola.

"I'm sure there will be a little bit of added spice for a pre-season friendly and it'll be great for the fans out there to witness," he told the club's official website.

"The support we get out there is incredible so the atmosphere will go up a notch I'm sure.

"Pre-season is an important time for the team and for the players, making sure that you get to that level that you need to be at for the start of the season."

"They're a terrific team who did well in last season's Bundesliga and I'm sure it'll be a good game for us," Carrick added.

"Playing against them will allow us, to a certain extent, judge where we're at.

"It's difficult to predict exactly what the games will be like because a lot will depend on which players are on display.

"But we know the games will be tough as we're talking about two great teams here. I'm sure they will be great games to watch."