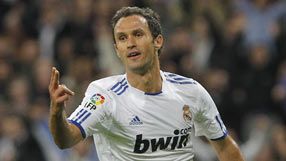 As well as helping to keep Real's tally of goals conceded down to five in 10 La Liga matches, Carvalho has netted two key strikes, scoring the only goal against Osasuna in September and the opener in Sunday's 2-0 Madrid derby win over Atletico.

He demonstrated his tactical nous in the lead up to his goal in the 13th minute at the Bernabeu, driving on through the static Atletico defence to pick up a loose ball and finish coolly past goalkeeper David De Gea.

"He scores his goals, two, three or four each season," Mourinho told a news conference after the derby win, adding that Carvalho had been the league leaders' best player on the night along with German defensive midfielder Sami Khedira.

"He (Carvalho) gets goals from set pieces or on the counter-attack," Mourinho added. "Today was a fast move and he showed his instinct to be in the right place at the right time. When he does that he is hard to stop."

Carvalho was a key member of Mourinho's Porto side when the self-styled Special One had his first taste of Champions League glory in 2004 and later played under Mourinho at English Premier League club Chelsea.

After joining Real in the close season, he has formed a solid partnership with compatriot Pepe and judging by the way Liverpool striker Fernando Torres humbled the Chelsea defence on Sunday, scoring twice in a 2-0 victory, the London club may be regretting letting him go.

Spanish newspapers echoed Mourinho's praise of the central defender on Monday, with Marca sports daily noting he had quickly become the leader of the back line and had relegated the likes of Spain international Raul Albiol to the bench.

"The Portuguese centre-back has given the Madrid defence the composure it was missing over the past few seasons," the Madrid-based paper wrote in an editorial.

"Against Atletico, he was impeccable on crosses, never allowed himself to be second best in one-on-one situations and had time to join the attack and open the scoring."

Before joining Real for a fee local media said was around 8 million euros, he helped Chelsea win three Premier League titles, three FA Cups and two League Cups and was part of the Portugal squad at the 2010 World Cup in South Africa.

Carvalho picked up a painful-looking and bloody cut to his eyelid in the second half on Sunday and may be unavailable for Real's King's Cup last-32 second leg at home to third-tier Real Murcia on Wednesday.

Murcia held the La Liga giants to a 0-0 draw in the first leg two weeks ago.