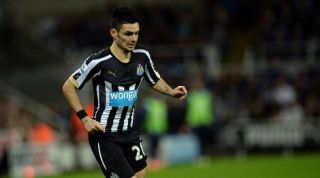 Jose Mourinho's Chelsea ultimately ran out 2-0 winners at Stamford Bridge, but Newcastle caught the eye for long periods, particularly during the first half.

Cabella, who has struggled to show his best form since joining from Montpellier in August, delivered a fine display and caused Chelsea plenty of problems.

And Carver is now demanding that the France international finds some consistency and produces such performances on a regular basis.

"Remy Cabella, who has been a little bit frustrating, showed his value," Carver told reporters.

"He was outstanding in possession and every time he tried to break someone was clipping him to stop the momentum of play.

"He added the other side of the game, the hard work, and he stuck to the gameplan.

"I worried towards the end of the game because he did fatigue and that's obvious because he's not used to playing 90 minutes.

"He's now set a standard and I told him in front of everyone that it's no good just doing that on a one-off basis.

"If you're not prepared to do that every week you'll be sitting with me and Stoney [coach Steve Stone]. That's what I told him in front of everyone.