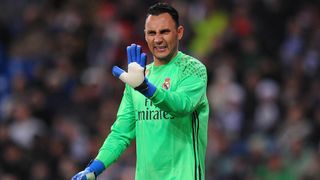 Former Real Madrid star Iker Casillas is unhappy that Keylor Navas has been jeered at Santiago Bernabeu, believing him to be one of the best goalkeepers in the world.

Navas has made a number of errors in recent weeks as Madrid hope to win LaLiga and retain their Champions League crown, with sections of the home support turning on the Costa Rica international.

However, Casillas, now at Porto after losing his place to Navas, cannot understand the criticism of a keeper he rates highly.

"What can I say? I don't like [the jeers towards Navas]," Casillas told Marca. "I experienced it and you have to have a lot of courage to forget about it. It is a demanding club.

"The whistles have settled at the Bernabeu and it's curious because, in Keylor Navas' case, watching his performance last season, it seems incredible to me that he is not among the top two or three goalkeepers in the world.

"With what Keylor did last year, winning the most important competition in Europe at club level - which neither UEFA nor FIFA have recognized - I do not say he is the best, but at least the second.

"With all due respect to Gigi [Buffon], it cannot be. Along with [Jan] Oblak, we are talking about two guys who had a spectacular Champions League."