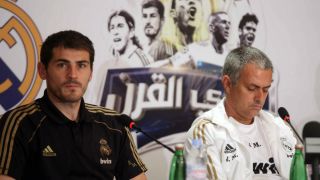 Iker Casillas says he did not lash out about a deteriorating relationship with former Real Madrid coach Jose Mourinho in order to avoid "a circus" at the club.

The Porto goalkeeper was Madrid captain and a long-term regular when Mourinho arrived at the Santiago Bernabeu, but the pair fell out during their final season together in 2012-13.

However, Casillas insists he kept quiet on the matter so that it would not become an even bigger issue within the media.

"I understand that there were people who had it in for me with my issue with Mourinho," he told Marca. "They [the fans] loved to whistle on the field.

"I kept quiet for the good of the club, so as not to be creating a circus when the situation was not good. In the end, we reached the [Copa del Rey] final and did not get the win, but I had that option [to play] at least until the end.

Mourinho won three trophies at Madrid before returning to Chelsea for a second spell and then moving on to his current post at Manchester United.