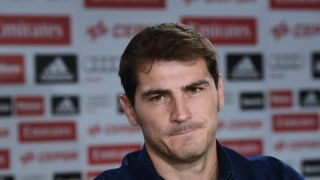 Iker Casillas' mother has issued an apology for inferring that her son was too good to play for new club Porto.

The legendary goalkeeper ended a 25-year association with Real Madrid last week to sign with the Portuguese side, the Spain international departing having made 725 appearances and winning five La Liga and three UEFA Champions League titles.

Casillas' mother Mari Carmen Fernandez and her husband, Jose Luis, originally spoke of their disappointment at his choice of destination and reportedly referred to Porto as a "third-tier" team.

However, she has now backed down from her original stance.

"I could be wrong," she said in an interview with Cadena Cope. "I want to thank Porto for signing my child.

"I hope their work can contribute to the success of this club. I want to apologise, a thousand pardons. I hope my son can succeed as much as in Madrid."