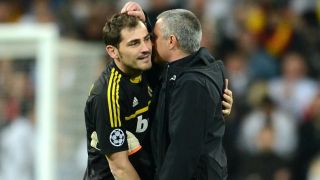 Mourinho's men endured a chastening trip to Anfield on Sunday, with Sadio Mane and a Xherdan Shaqiri double giving the league leaders a deserved victory.

United sit sixth in the table, 19 points behind Liverpool and with a goal difference of zero, having picked up their worst points total after their first 17 games since 1990-91.

Casillas wasted little time in seemingly taking aim at Mourinho, who had disparagingly described the former Real Madrid goalkeeper as someone near the end of his career in a recent interview with Portuguese newspaper Record.

"According to a Portuguese newspaper, someone said that a player like me [37 years old] is at the end of their career. I completely agree!" Casillas wrote on Twitter.

"My question, for this newspaper, is: in the case of coaches, when and at what moment do you see they are no longer leading or training a team?"

Casillas and Mourinho endured a difficult relationship during the turbulent final few months of the coach's time in charge of Madrid in 2013.

Spain great Casillas told Jorge Valdano in an interview for Vamos that given the chance to repeat that time at the Santiago Bernabeu he would have "taken the bull by the horns and faced Mourinho".

That prompted Mourinho to state that the Porto keeper's comments were "typical of someone who is at the end of his career".