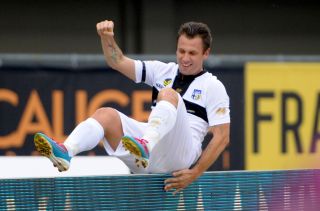 Ghirardi claimed he was labelled as 'mad' for signing Cassano, who has publicly fallen out with coaches and clubs throughout his career, but argued the 31-year-old forward has paid him back with three goals and as many assists in Parma's opening eight games in Serie A.

While Cassano has a reputation as a loose cannon, Ghirardi said he believes the former Real Madrid, Sampdoria, Milan and Inter striker has shown Parma's younger players what is required to succeed at the highest level.

"People told me I was mad when I signed Cassano but he has been professional both on the field and off it," Ghirardi told Radio Deejay.

"Today perhaps the best player at Parma is Marco Parolo but artists like Cassano bring entertainment and many people are changing their minds on him."

Parma sit 13th ahead of their clash with one of Cassano's former clubs, Milan, on Sunday and their head coach Roberto Donadoni has targeted an 'intense performance' to upset the side who occupy eighth spot.

"How do you cause problems for a side like Milan? By giving 110 per cent, raising the bar ever higher with an intense performance," Donadoni said.

"We must be determined from start to finish, aggressive, solid and playing with the same mentality we've had all season.

"What we do need to change is limiting those errors and naive moments that cost us dearly."

Parma will enter the match at home with a pair of wins and draws in their past five games, although they lost last week 3-2 away to Verona.

Milan drew 1-1 with Barcelona in the UEFA Champions League on Tuesday, while they won their most recent league encounter 1-0 over Udinese.