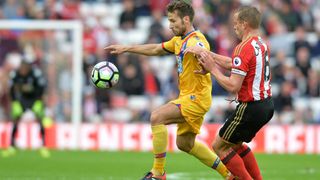 Sunderland midfielder Lee Cattermole will be out for four months after undergoing surgery on a hip injury.

The 28-year-old has made just two appearances in the Premier League this term, the second of which was on September 24 in a 3-2 home defeat to Crystal Palace.

The long-standing back injury that Cattermole aggravated in that loss had reportedly started to clear up as he neared a return.

But now the midfielder has torn cartilage in his hip and is expected to be out until March, robbing Sunderland of his his experience of previous relegation battles as David Moyes' side head towards another fight for survival.

Moyes told a media conference on Friday: "Lee Cattermole had an operation in America on Monday on a torn cartilage in his hip and will be out for four months.

"He's out there just now, coming back in the next day or two, I think."

While Cattermole's continued absence is a disappointment and Jack Rodwell remains sidelined, manager Moyes is feeling positive about their wider fitness situation.

"We've had a good couple of weeks and it felt good to win again [against Bournemouth]," he added. "We've had great support and we want to keep winning.

"I'm hoping we've put all the injuries behind us. The players are in good spirits and we want to do it [win] again.

"Fabio Borini and Lee Cattermole aren't back yet and Jack Rodwell has an injury, but apart from that we're okay.

"Jan Kirchhoff is back in training but he won't feature.

"[Victor] Anichebe had a rib injury [against Bournemouth]. I got a message after 15 minutes that he might have to come off, but it wasn't a break and he's OK."