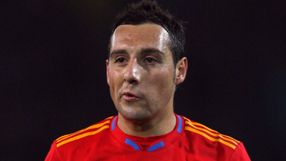 Sevilla winger Navas misses out having recently had surgery on an ankle injury.

The world and European champions face their neighbours at the Stadium of Light in Lisbon on Wednesday in a friendly they hope will boost the countries' joint bid to host the 2018 World Cup finals, coach Vicente del Bosque said on Friday.

"This is an important game being held just under a month away from the decision to choose the hosts for the 2018 World Cup finals," coach Vincente Del Bosque told a news conference on Friday.

"We can give the final push for the two countries to be successful in their bid."

Midfielder Xavi, a candidate for the FIFA Ballon d'Or, has been struggling with an Achilles problem that has seen Barcelona using him sparingly this season, and led to him dropping out of October's internationals.

With Barca set to play league leaders Real Madrid on Monday November 29, Del Bosque was asked whether the champions had put up any resistance to releasing Xavi.

"Xavi has always shown his desire to come and play with the national team and if I remember correctly he is set to win his 97th cap," Del Bosque added.

"To doubt his commitment isn't correct."

Spain's last match of 2010 provides Portugal with the chance to avenge the 1-0 defeat they suffered in the World Cup finals, when David Villa scored the only goal to knock them out.

FIFA will make their decision on the hosting of the 2018 and 2022 World Cup finals on December 2. Russia, England and a joint bid from Belgium/Netherlands are also in the running to stage the 2018 tournament.