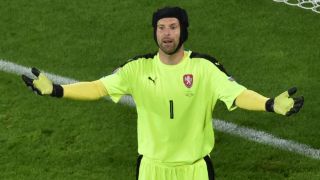 The 34-year-old played all three matches as his side picked up just one point at Euro 2016, finishing bottom of Group D.

Now, he has decided to bring an end to his 14-year international career having made his debut in February 2002.

"It is a definite decision," Cech told the Czech Republic Football Association (FACR).

"The fact we did not win at the Euros had no effect on my decision, although obviously I would have preferred a triumphant farewell.

"I like to do things 100 per cent and there will come a time where I have to ease the burden on myself. That time may not be now, but qualification for the World Cup takes two years and it would not have been right to announce that I do not feel I can carry on in the middle of that.

"Therefore it is better to make the decision now and close a beautiful chapter."

We lived some amazing moments together - Wishing the team all the best for the future July 8, 2016

He added on Twitter: "We lived some amazing moments together - wishing the team all the best for the future."

The FACR paid tribute to Cech, thanking him for his achievements, saying: "Petr Cech has announced the end of his Czech representation. He played in 124 games, which nobody has beaten. Petr, thank you for everything!."

He played in the 2006 World Cup as well as four consecutive Euros, with the highlight being his side's run to the semi-finals at Euro 2004.