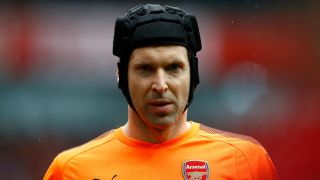 Petr Cech has been ruled out for up to four weeks with the hamstring injury he suffered in Arsenal's win over Watford.

Bernd Leno came on to make his debut and will seek to impress coach Unai Emery as he eyes an extended run in the starting line-up.

"Expected to return to full training in three to four weeks," the statement said of Cech's hamstring injury.

Arsenal added that Laurent Koscielny's recovery from an Achilles injury is progressing well.

The France centre-back, who missed the World Cup, could return to full training next month.

Emery's men, who have won seven games in a row, face Europa League clashes with Qarabag and Sporting CP in October, along with Premier League matches against Fulham, Leicester City and Crystal Palace, and an EFL Cup tie at home to Blackpool.