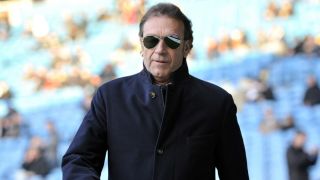 Leeds United chairman Massimo Cellino has confirmed he is happy to sell the club to supporters group Leeds Fans United.

The former Cagliari owner, who is currently appealing a Football League ban, met with supporters on Friday to discuss the club's future, a day on from fans chanting anti-Cellino songs during the 2-0 home defeat against Blackburn Rovers in the Championship.

The fan group stated via their Twitter account that they had "reached agreement in principle with Massimo Cellino to purchase a majority stake" in the football club.

Cellino himself later confirmed to BBC Radio Leeds that he was ready to accept an offer, saying:  "100 per cent I will sell to the fans, if they want to buy it and look after the club. The fans are the only asset the club has."

The 59-year-old, who has sacked five managers since taking charge at Leeds in 2014, had earlier in the day told The Times that he was ready to bring an end to his "nightmare" at the helm at Elland Road.

"I'm losing my balls," he said. "Ten years ago, I had more balls, but since I came here it's been a nightmare.

"Now I have a low quality of life. I feel shame when I walk to the shop to buy cigarettes if we lose a game.

"I convinced my family to come here and they have run away.

"It's like being at a party where you're not welcome. It's killing me. Every night I lie awake, asking myself, 'Am I good enough?'."