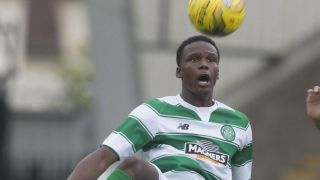 Dedryck Boyata headed a debut goal as Celtic secured a composed 2-0 win over Stjarnan in the first leg of their UEFA Champions League second qualifying round tie at Parkhead.

Another close-season recruit, Nadir Ciftci, passed up a succession of chances to break the deadlock as Ronny Deila's side dominated their Icelandic opponents, but it was left to former Manchester City defender Boyata to open the scoring in the 44th minute.

Jeppe Hansen and Horour Arnason missed opportunities to level after the break as Stjarnan belatedly made their presence felt as an attacking force, but the impressive Stefan Johansen netted in style to give Celtic breathing space.

Stjarnan's former Motherwell goalkeeper Gunnar Nielsen displayed inspired form on his return to Scotland and kept out a 78th-minute penalty from substitute Leigh Griffiths to preserve his colleagues' faint hopes ahead of next week's second leg.

Ciftci signed for Celtic from Dundee United last week and almost enjoyed a dream start in the ninth minute, slickly turning his marker to draw a save from Nielsen.

On the rare occasions Stjarnan went forward they were vulnerable on the counter-attack, with Johansen dragging wide before Nielsen saved magnificently with his feet to thwart Stuart Armstrong in the 29th minute.

The home crowd were beginning to get restless when Ciftci glanced a headed attempt wide in the 38th minute but they were brought to their feet as the interval approached.

Johansen produced a superb cross from a cleverly worked short corner and Boyata rose unchallenged at the far post to power home.

It was almost 2-0 in first-half stoppage time, but James Forrest's attempt was scrambled behind.

Ciftci's frustration was clear when he miscued a header after Forrest whipped a cross back from the right byline.

Boyata was caught napping at the back post in the 52nd minute as Hansen pulled an effort across the face of goal.

There was another close shave for Celtic as Arnason was allowed room to loft a shot over from 18 yards and Deila's men responded by doubling their advantage.

Armstrong cut in from the left and released a perfectly weighted pass into Johansen's path for his team-mate to deftly touch the ball beyond Nielsen.

The Faroe Islands international goalkeeper excelled himself in plunging to his left to push away Griffiths' spot-kick after Johansen went to ground and he kept the tie alive with a stunning reaction stop from the latter player in the final minute.