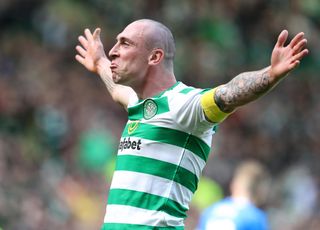 Celtic manager Neil Lennon claims Scott Brown has “nothing to defend himself for” after being hit with a Scottish Football Association disciplinary charge over the scenes which followed their victory over Rangers.

Brown, who was struck by both Alfredo Morelos and Ryan Kent during Sunday’s game, has been accused of breaching a rule which states players must act in the best interests of football.

Andy Halliday received a post-match red card for remonstrating with Brown over his celebrations in front of the Rangers fans.

Halliday’s approach to Brown and the ensuing struggle sparked a mass confrontation which has seen both clubs receive an SFA charge.

Lennon told Celtic TV: “My players have been exemplary, absolutely exemplary, under immense provocation themselves.

“Scott Brown has nothing to defend himself for. I think his treatment on the pitch was nothing short of disgraceful.

“He has been elbowed, he has been hit in the face, but he takes it, stands up to it, and comes back for more. That’s the character of the man.

“You get the usual nonsense and trying to put the same eggs in one basket. We are totally exempt from any blame for this whatsoever.”