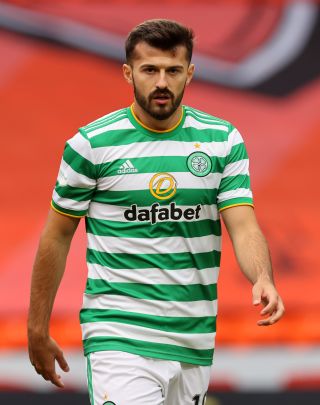 Neil Lennon suggested Albian Ajeti has a touch of former Celtic striker Gary Hooper about him after he scored the winner against Dundee United.

In the 73rd minute of an absorbing game at Tannadice, the 23-year-old Switzerland international – signed from West Ham for £4.5million – came off the bench to make his first Premiership appearance for the champions.

And with just seven minutes remaining Ajeti grabbed his first goal in green and white for what Parkhead boss Lennon described as a well-deserved 1-0 victory over the newly-promoted home side.

He then offered up comparisons with Hooper, who successfully led the line for Celtic between 2010 and 2013.

“He’s a bit more like a Hooper-type, that squat sort of build, he’s a good finisher.

“He had a great time of it at Basel, not so much at West Ham, but that happens and it’s a new lease of life for him and he’ll get a real buzz out of what he did on Saturday.”

Lennon praised his side for their relentless pursuit of the breakthrough on Tayside which sets them up for Wednesday’s Champions League second qualifier against Hungarian side Ferencvaros at Celtic Park.

The former Parkhead captain said: “The attitude of the players was absolutely tremendous and you never lose faith in this team. They know how to keep going, they kept patient and they got what they deserved.

“It was a good game, it was feisty, it was mentally challenging for the players and they’ve come through that so, psychologically, it will give them a big lift.”

Dundee United midfielder Calum Butcher told DUTV: “This is where we want to be playing our football. These are games you want to be involved in.

“We don’t want to take part, we want to be right in the game and I think we did that.

“I think we made United proud and hopefully the fans could see that we put in a shift for the badge.

“We got into some good areas, worked our socks off and nullified them as much as we could.

“Obviously Celtic are going to have chances but as a whole we defended really well as a team.”