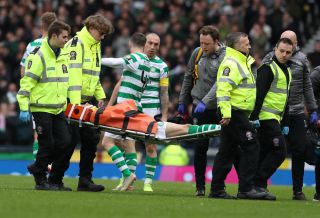 The 24-year-old was poleaxed by the Dons defender following a sickening clash of heads during Sunday’s William Hill Scottish Cup semi-final.

Ball was shown a second yellow card by referee Craig Thomson after smashing into his opponent’s cheek.

Christie had to be carried from the Hampden pitch on a stretcher wearing a neck brace but later released a picture on social media giving the thumbs up while sporting a nasty looking black eye.

However, Parkhead chiefs say they are not yet at a stage where they can predict when the former Inverness and Aberdeen playmaker will return as he prepares to go under the knife – placing his participation in next month’s Scottish Cup final against Hearts in serious doubt.

“Ryan is scheduled to undergo surgery on Thursday of this week. We are not able at this stage to give any specific indication on a timescale for his return to action but, of course, everyone at Celtic wishes Ryan all the best for his full recovery.

“Ryan would also like to thank everyone sincerely for the many wishes of support he has received.”

Tom Rogic took over from Christie following the 38th-minute incident as went on to score the final goal in a 3-0 win over Derek McInnes’ team as they teed up their showpiece duel with the Jambos.