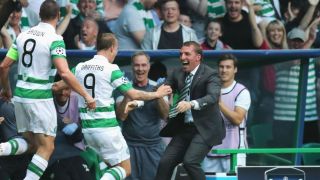 Celtic manager Brendan Rodgers has warned that his side must not get carried away following their 5-2 victory over Hapoel Be'er Sheva in the first leg of their Champions League play-off at Celtic Park.

The hosts raced into a comprehensive first-half lead courtesy of Tom Rogic's close-range effort, while Leigh Griffiths - brilliant throughout - followed up a superb header with a sublime free-kick to make it 3-0 at the interval.

However, the visitors came back strongly in the second half, grabbing two goals back in quick succession before substitute Moussa Dembele headed home, with skipper Scott Brown sealing the victory late on following a tremendous save from Craig Gordon at the other end.

But, despite their attacking proficiency, it was a far from convincing defensive performance from the Scottish champions, and Rodgers admitted there is still work to be done.

"It was a brilliant result for us, obviously would have preferred 3-0 but 5-2 shows the level we played at," he said. "But we are not getting carried away, there's still a massive job to do out there [in the second leg].

"In the first half we were excellent, pressed aggressively, scored three and could have scored more. Then we had a spell where we defended poorly, conceded two poor goals and didn't reduce the space.

"At any level you are going to come under pressure at times and it's all about gaining control again and shifting the momentum. To go on and win 5-2 really shows the mental strength of the players along with their quality.

"We're nowhere near the finished article yet but they look an exciting team full of character. I thought the fans were absolutely incredible as well. The support tonight really helped the players.

"When it went to 3-2, before this it might have been an edgy game but they stayed calm and roared the team on. In the main, we defended well but we must be better - we have to be better, and that will come with more work."