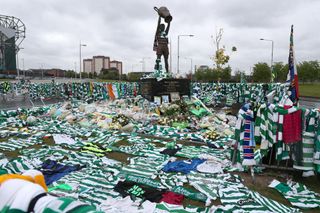 Neil Lennon’s players will wear shorts marked with both numbers five and nine when they face Hearts on May 25 – 52 years to the day since McNeill and Chalmers played key roles in firing Celtic to European Cup glory.

The pair died within the space of seven days of each other last month.

Forward Chalmers netted the winner as Celtic beat Inter Milan in Lisbon in 1967 before centre-half McNeill lifted the trophy.

A statement from Celtic read: “One number will be on the front left of the shorts, while the other will be on the back right, a reflection of the iconic way the Celtic players wore their numbers in the 1960s when Billy and Stevie wore the green and white hoops with such distinction.”

Players will also wear jackets with either ‘McNeill’ or ‘Chalmers’ on the back along with their respective numbers when they walk out at Hampden.

Ukrainian winger Marian Shved will be among those cheering Celtic on as the January signing arrived in Glasgow after completing his loan spell with Karpaty, the club who sold him to the Scottish champions.

The 21-year-old, who scored 15 goals in 26 league games this season, told Celtic’s website: “It’s great to finally be here at Celtic. I’ve been really excited about coming, and now I am here, I’m really looking forward to starting my Celtic career.

“I’ve had a great few days at the training ground already, and I’ve spent my time working hard as I always do.

“The next few weeks is a great chance for me to get to know the club and the players and other people at Celtic. I have had a brilliant welcome already, and I am very grateful to everyone for making me feel at home.

“I have been out in Glasgow, too, and had the chance to meet some fans, which has been great fun and, again, they have treated me so warmly.

“I’m already thinking ahead to next season and I can’t wait to get out at Celtic Park, such a brilliant arena, and play for the fans.”