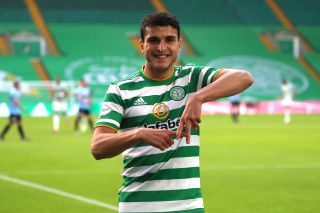 In a one-legged tie played behind closed doors, Neil Lennon’s side showed the Icelandic outfit no mercy.

Attacker Mohamed Elyounoussi broke the deadlock after only seven minutes and striker Odsonne Edouard pressured defender Arnor Adalsteinsson into an own goal before defender Christopher Jullien headed in a third just after the half-hour mark.

Left-back Greg Taylor helped himself to his first Celtic goal early in the second half and Edouard flashed in a fifth with Elyounoussi grabbing his second in added time to put the seal on a performance that offered no prospect of a shock.

The Celts sail through to the Second Qualifying Round of the @ChampionsLeague! 👊#CELKRR#UCLpic.twitter.com/lRRdxGj7qR— Celtic Football Club (@CelticFC) August 18, 2020

KR Reykjavik boss Runar Kristinsson had hoped for an unlikely result equivalent to Iceland beating England in Euro 2016 but his side were simply fodder for the Hoops who will host Hungarian side Ferencvaros or Djurgardens of Sweden in the second qualifier next week.

With no fans allowed inside the stadium due to ongoing coronavirus restrictions, it was a far-from-normal European night in the east end of Glasgow.

The home side made two changes to the side that drew with Kilmarnock nine days ago, with defenders Nir Bitton and Hatem Abd Elhamed replacing Kristoffer Ajer and Jeremie Frimpong.

Albian Ajeti, the Swiss striker recently signed from West Ham, started on the bench where he watched his new team-mates quickly put the Icelandic champions under pressure.

Within minutes keeper Beitir Olafsson had saved a close-range header from Edouard, following a cross from Taylor.

However, the keeper looked less convincing when Jullien played a ball over the top and Elyounoussi smartly rounded  him before slipping the ball into the empty net.

Edouard had another couple of attempts on goal before Adalsteinsson, fighting to prevent the Frenchman from getting on the end of an Elhamed cut-back, turned the ball into his own net.

Olafsson made further saves from Elyounoussi and James Forrest but when Jullien powered in a header from a Ryan Christie corner it looked ominous for the visitors.

Olafsson kept out efforts from from Christie and Elyounoussi, twice, and defender Kennie Chopart blocked an Edouard shot on the line.

KR Reykjavik almost snatched a goal just before the interval when striker Kristjan Floki Finnbogason tested Hoops keeper Vasilis Barkas with a decent drive from the edge of the box in a rare attack.

Celtic flexed their muscles again at the start of the second half and Taylor netted with a back-post header from an Elhamed cross.

Kristinsson’s side kept plugging away but in the 71st minute some neat footwork inside the box took Edouard past three defenders before a decisive finish and he and Christie were immediately replaced by debutant Ajeti and Patryk Klimala.

Understandably, Celtic eased off a little in the final stages and KR Reykjavik’s Palmi Rafn Palmason had the ball in the net only for the offside flag to be correctly raised, denying the visitors a consolation on a chastening night which ended with man of the match Elyounoussi sliding in a sixth from a pass from substitute Olivier Ntcham in added time.