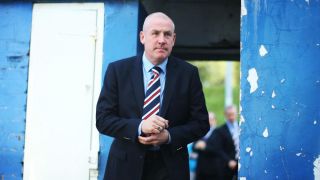 Mark Warburton has added his voice to calls for Celtic and Rangers to join the Premier League.

On Wednesday, Celtic's majority shareholder Dermot Desmond expressed his belief that the two Glasgow giants will be playing in England within the next 10 years, a claim that drew some measure of endorsement from the club's Norwegian manager Ronny Deila.

And now Rangers' English boss Warburton has also suppored that view, although the man in charge at Ibrox conceded such an unprecedented shift in the landscape of British football is by no means imminent.

"I am sure sooner or later, sometime in the future, not saying the near future, I am sure that will happen," he said.

"There are a lot of hurdles to overcome before that becomes a reality. What dominates down south right now is TV money, it is obviously different down south to north of the border."

According to Warburton, the prospect of making the English Premier League more attractive to television rights bidders would be the driving force behind such a transition.

"I am sure you will get to the stage sooner or later where team X versus team Y hasn't got the same appeal to the average fan in the street, whereas Manchester United versus Rangers, Celtic versus Arsenal et cetera, it is new, it is fresh, it is another level of excitement.

"I am sure any product is always looking to keep it fresh. If you ask any people down south they recognise the potential of clubs such as Celtic and Rangers. There is no doubt about that."

However, the former Brentford manager also knows numerous obstacles would need to be negotiated before the ambitious idea moves closer to reality.

"But again, there are many hurdles still to come," he said. "Where would they go? What level? How would they get in? How do you start that process?

"It would take far smarter guys than I am to work it out."