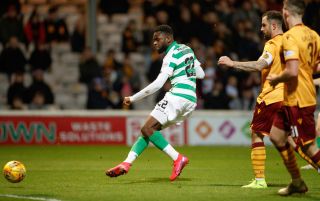 Celtic’s comprehensive 4-0 win over Motherwell at Fir Park kept the champions on a steady course for their ninth successive Ladbrokes Premiership title.

In-form striker Odsonne Edouard scored after nine minutes of a first half in which the battling home side had missed several chances.

However, it became too much when Leigh Griffiths prodded in number two in the 51st minute before Callum McGregor added a third with a thunderous volley.

Edouard then curled in a wonderful free-kick, his second set-piece goal in two matches, for his 24th goal of the season as Celtic secured a sixth victory in a row since they lost to chasing Rangers at the end of last year.

The Hoops remain seven points ahead of the Light Blues at the top of the table, albeit Steven Gerrard’s men have a game in hand, but if anything it is Neil Lennon’s men who are building a head of steam towards the run-in.

The visitors, with Croatian Jozo Simunovic back in defence, started with purpose and with the confidence of having Edouard and Griffiths in attack.

However, Motherwell were equally enterprising.

Moments later, the home side felt the full force of Celtic’s 22-year-old French forward when he combined with midfielder McGregor in a swift attack.

When Edouard got the break of the ball after his first attempt on goal was blocked, he calmly slipped it under Steelmen keeper Mark Gillespie.

The Lanarkshire side rolled up their sleeves and got stuck in again.

Well midfielder Allan Campbell missed the target with a shot after the Celtic defence had been opened up once more before Griffiths scooped an Olivier Ntcham cut-back over the bar from eight yards.

In the 28th minute Aarons hit the outside of the post but was penalised for a foot up on Celtic defender Greg Taylor, before Forster saved a long-range drive from Hylton.

Aarons had a great chance just before the break after Simunovic had missed the ball but his angled-drive from 12 yards was brilliantly saved by Forster for a corner which came to nothing.

Six minutes after the break Celtic doubled their lead when McGregor ended a penetrating run into the Motherwell penalty area by cutting the ball back for the unmarked Griffiths to knock it past Gillespie without too much fuss for his fourth goal in six matches.

Well kept going but conviction seemed to seep slowly away.

Just after the hour mark, Griffiths saw his header from an Edouard cross rebound off the bar before Ntcham somehow lifted the ball over from close range after being set up by his fellow Frenchman.

Ryan Christie replaced Griffiths with 20 minutes remaining before McGregor took a pass from James Forrest and volleyed high past Gillespie from the edge of the box.

In the 80th minute Edouard capped another fine performance with a fourth from a 25-yard free-kick, after Christie had been hauled down by Well defender Declan Gallagher.