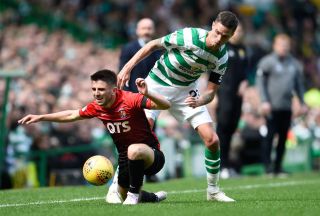 Celtic have completed the signing of left-back Greg Taylor while Rangers are set to announce the return of Ryan Kent.

Scotland left-back Taylor has signed a four-year contract after Celtic reached a deal with Kilmarnock for the 21-year-old.

Taylor told Celtic’s website: “It’s been a whirlwind of a day but I’m over the moon to be here and thankfully that’s it over the line.

“As soon as I knew of Celtic’s interest, I was desperate to come, so it’s been a great day, certainly now that it’s done.”

Rangers have agreed to pay a fee of about £7million for Liverpool winger Kent after the 22-year-old spent the summer in limbo.

The Reds refused to sanction a second loan move to Ibrox but Rangers bided their time, however their hand was forced when Club Brugge made a move for the winger.

Manager Steven Gerrard had claimed on Sunday that any incoming transfer would have to come “out of the blue”.

The Ibrox club have moved on two players. Summer signing Jake Hastie has joined Rotherham on a season-long loan and Graham Dorrans has been linked with Kilmarnock after agreeing a deal to tear up his Gers contract.

Motherwell have signed former Kilmarnock and Dundee midfielder Mark O’Hara on a season-long loan from Peterborough.

Left-back Adam Livingstone has joined Morton on loan, while attacking midfielder Craig Tanner has rejected the offer of a four-month contract extension after recovering from a serious knee injury.

Kilmarnock have been linked with a number of players including Celtic pair Jack Hendry and Calvin Miller, O’Hara and Scotland Under-21 and Venezia forward Harvey St Clair.

But the first piece of business at Rugby Park was the departure of Kirk Broadfoot after the defender was released from his contract.

Hamilton have signed 22-year-old German midfielder Adrian Beck from Union Saint-Gilloise in the Belgian second tier on a season-long loan.

Head coach Brian Rice told the club’s website: “I’m happy we’ve managed to get Adrian for the season, offensive midfield is an area we needed to strengthen and I believe we’ve now done that.

“He’s a good age and he’s very sharp on the ball, I think he will settle well in Scotland.”

A club statement read: “Livingston FC can confirm the mutual termination of Gregg Wylde’s contract which sees the player depart the club with immediate effect.”

Scots on the move in England included former Rangers and Hibernian striker Jason Cummings, who moved from Nottingham Forest to Shrewsbury for an undisclosed fee, and former Hamilton midfielder Ali Crawford, who signed for Bolton from Doncaster.