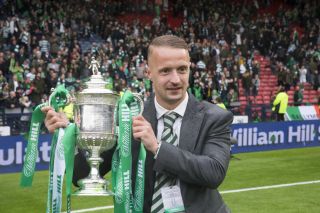 Celtic striker Leigh Griffiths is “on the home straight” in his recovery from personal issues and is looking forward to returning to action next season.

The 28-year-old Scotland international has not played since a 5-1 win over Kilmarnock at Parkhead on December 8.

Griffiths watched his Hoops team-mates clinch an unprecedented domestic triple treble with a 2-1 William Hill Scottish Cup final win over Hearts at Hampden Park on Saturday and is ready to join up with them again when they return for pre-season training on June 17.

He told Celtic TV: “It has been a tough few months, training myself, double sessions nearly every day.

“But I’m on the home straight now and not long to go before pre-season.

“I’m hoping to come back a lot fitter than I have done in previous starts to the campaign.

“Being in the gym nearly every day gives me that platform to get fitter and when I come back on the 17th I will be raring to go.

“Football has been my life and it has been for the past number of years.

“It was frustrating being off but my big focus was to come back mentally and physically stronger.

“I’m buzzing to get back among the boys and start playing my football again.

“From where I was in December to now is night and day, so hopefully when I pull that jersey on and step onto the pitch I will be firing on all cylinders.”