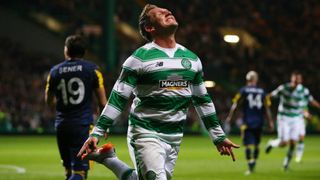 Kris Commons has apologised for his outburst after being substituted in Celtic's 3-1 Europa League defeat to Molde on Thursday.

The former Scotland winger was replaced in the 76th minute in Norway before aiming a tirade at assistant manager John Collins as he took his seat in the dugout.

Commons, who pulled a goal back for the Celtic at 2-0 down, was upset at the decision to replace him with Nadir Ciftci but has since expressed regret at his actions.

"I'd like to apologise for my reaction last night, something that should never be shown publicly on the field," Commons said in a statement.

"I was very frustrated at how the night had gone. However, I did not handle this in the right way. My frustration at losing games and my desire to win will never change."

Celtic are winless in Group A and sit bottom of the table having taken two points from three fixtures.