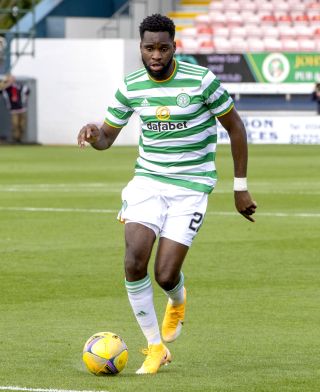 Celtic striker Odsonne Edouard could be set to miss the visit of Rangers after testing positive for Covid-19.

The French Football Federation has announced Edouard tested positive for the coronavirus while on France Under-21 duty. The 22-year-old is now self-isolating.

Scottish Government rules dictate that people should self-isolate for 10 days after a positive test.

Rules on the French government website state that someone who tests positive must self-isolate for seven days. If there are still no symptoms, the self-isolation is lifted. If the patient develops symptoms, the isolation period is extended by seven days from the date of the onset of symptoms.

A statement from the FFF read: “The result of his Covid-19 test carried out by UEFA this Tuesday morning, October 6 having been positive, Odsonne Edouard was sidelined from the group upon receipt of the results, at the end of training . He was then placed in isolation.

“All the other tests carried out on the entire delegation, staff members and players, were negative.”

Edouard played in Celtic’s 2-0 win over St Johnstone on Sunday but the club say no other player has been affected.

We can confirm that Odsonne Edouard has tested positive for COVID-19 while on international duty with France U21.— Celtic Football Club (@CelticFC) October 6, 2020

A statement on the club’s Twitter account read: “We can confirm that Odsonne Edouard has tested positive for COVID-19 while on international duty with France U21.

“As it stands, no other #CelticFC player has returned a positive test.

Edouard has scored six goals in nine appearances against Rangers and his absence against the Scottish Premiership leaders would be a major blow.

Premiership players who return a negative test immediately after a positive one are still required to self-isolate.

Celtic were without striker Albian Ajeti in Perth but Neil Lennon has reported the Swiss striker is expected to return to training by the start of next week.

Leigh Griffiths came off the bench to score a late opener in his first appearance of the season on Sunday before fellow substitute and forward Patryk Klimala made it two.