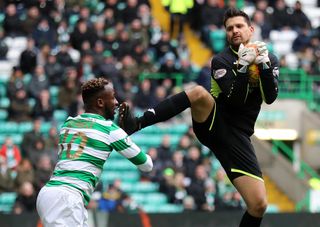 Goalkeeper Tomas Cerny is happy to keep playing a supporting role after signing a new one-year contract with Aberdeen.

Cerny has only made one appearance since joining the Dons from Partick Thistle last summer, coming off the bench for the injured Joe Lewis in a 2-1 win over Hibernian.

But the Czech is happy to be making a contribution off the park and to be putting down roots after spells in Bulgaria and Greece following his exit from Hamilton in 2012.

The 34-year-old told Aberdeen’s official website: “It’s important you do things that are right for you, but also right for your family.

“We feel settled here, I had a very good year and you don’t want to keep changing. I’ve moved seven or eight times over the last nine years and therefore had to move houses, apartments and countries and it’s been a lot.

“There was a chance to have a bit of stability and stay somewhere for another year, somewhere I really enjoy being, so I’m delighted with that.

“I believe I’ve got an important role to play. I’ve been about and experienced a lot in football so there’s always that experience I can share with younger players.

“It would be nice to play more games than the one, but at the same time that’s my role at the club. If it’s that one game and I’ve made that contribution, then I’m happy with that.”