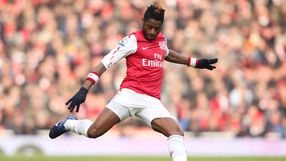 "Some of the passes he has been putting in, like for two of the unbelievable volleys Robin [van Persie] has scored, reminds me technically of watching Fabregas put those balls through," Oxlade-Chamberlain told the club's official website.

The former Southampton starlet added that Song has developed into more of a complete midfielder and underlined his importance to the team.

"For a holding midfielder to do that, as well as the defensive side of the game, is brilliant. You can't ask for anything more.

"He has been brilliant for us all season and he is a really good guy to have in the dressing room as well. He is always happy and putting smiles on everyone's faces - he is a massive part of the squad."

The England Under-21 international has adjusted well to life at Emirates Stadium, producing some outstanding performances against Blackburn Rovers and AC Milan.

He claims he is benefitting from the experience of Song and the other midfielders in the squad.

"You always try to learn off anyone in the team, especially top players like Alex Song and Mikel [Arteta], as well as Aaron [Ramsey] and also Jack [Wilshere] when he is back.

"I watch them every week in training. I look at the movement they have off the ball, and when they have the ball they are always positive and looking to find Robin or a winger. I can take that into my own game.”