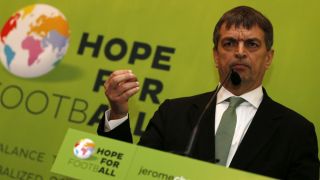 Jerome Champagne has pleaded with the FIFA member associations for support after conceding that he does not have the five nominations needed to challenge Sepp Blatter for the presidency.

Champagne, a former director of international relations at FIFA, announced his intention to run against Blatter - who is seeking a fifth term in office - in September last year.

He has since been joined in the race for football's top job by Prince Ali Bin Al Hussein of Jordan and former Paris Saint-Germain, Newcastle United and Tottenham midfielder David Ginola.

Candidates must secure the required letters of nomination by January 29 and Champagne has blamed "gold-diggers" and a feeling that the result of the election is inevitable for his struggles in doing so.

In an open letter Champagne said: "I do not yet have all the five letters. The feeling exists that the final result of the election is set and it would be risky to sign them.

"There is also a fear of being singled out or punished. And now individuals without a programme declare their interest, and golddiggers openly using FIFA for their own benefit, rather than being of service.

"At this stage it is not about choosing who will be the next FIFA president because a nomination is not at all a statement of support or a commitment to vote.

"It is only about enabling a candidate, the only one so far with a detailed, realistic and implementable platform to serve your football associations and football, to be in the position to continue defending it and advocating for its content."

Some have questioned the motivation of Champagne, a close ally of Blatter before his departure from FIFA in 2009, while others have criticised him for failing to publicly hit out at the FIFA's long-serving chief.

But Champagne continues to insist he is standing for the right reasons.

"I have privileged the defence of FIFA at the very moment when so many still hope to weaken it with the objectives of limiting the world governance of the game, or enslaving it for their own interests," he added.

"I have also refused the demagoguery to blame only one person for all the wrongs in football when the responsibility is obviously collective.

"Finally I have opposed the current simplistic analysis according to which all is wrong in FIFA, by presenting a programme to continue what has been done correctly during the last 40 years and to change what needs to be changed."

The election will take place at FIFA's congress in May.