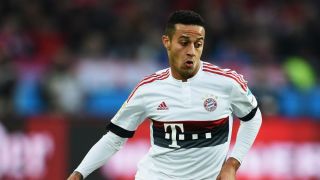 Bayern have dominated domestically during Pep Guardiola's time in charge, the Bavarians winning two Bundesliga titles and a DFB-Pokal in the Spaniard's first two campaigns.

However, Bayern have fallen at the semi-finals of the Champions League for two seasons running.

Thiago is content with Bayern's showings in the first half of the season, with the club top of the league by eight points and through to the Champions League knockout stages at a canter.

And he is now desperate to win Europe's premier competition in Guardiola's final season at the Allianz Arena.

"This is just the first stage of the season and all the teams have been playing at high level," he said.

"All the European big clubs have been at a high level, also Bayern. We have played some great football, we are top of the league.

"But at the end of the day, all the big clubs want a good performance in Champions League. This will be a benchmark for the rest of the season."