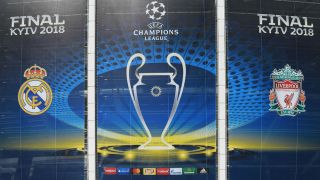 The Champions League circus well and truly arrived in Kiev on Saturday as the last of the supporters made it to the city and anticipation grew ahead of the final between Real Madrid and Liverpool.

After all of the struggles fans have faced in reaching the Ukrainian capital, the focus was fully on making the most of the occasion on the morning of the decider.

From a Madrid follower's hijacking of a brass band's bus, to the lively Liverpool fan park, there has been plenty going on around the city in the build-up to the match.

Here are a handful of highlights from the last 24 hours in Kiev.

The final's host broadcaster - the aptly named 'Football' - marked the night before the match by showing past finals in their entirety and uninterrupted back-to-back.

A real marathon for the Champions League obsessed, the series had only got as far as kick-off in the 2015 final by midnight.

Most will have fallen asleep before finding out if the channel made it all the way to the present day, which would have seen Madrid lift the trophy in Cardiff last year at around 5am local time.

After a quiet start to the day - perhaps understandable given kick-off is not until 21.45 in Kiev - the city centre became a sea of colour, and a local brass band really did their bit to add to the atmosphere.

Stationed just outside the main fan park, the band played a range big-band favourites and drew a huge crowd.

They wouldn't have been entirely pleased, however, to see a Real Madrid fan sneak onto one of their buses, put on one of the band's metal helmets and begin sounding the horn.

The supporter was soon encouraged by a fellow Madridista and a passerby to abandon his hijacking of the bus, while the band continued oblivious to the incident.

And, while the band were playing, one Madrid fan hopped in the driving seat of their bus, put on one of their hats and made some noise of his own...May 26, 2018

The Liverpool contingents appears to dwarf the turn-out from Madrid considerably in Kiev and there are few places in the city centre that are not within earshot of a Kop classic.

You'll Never Walk Alone was sung proudly at St Michael's Golden-Domed Monastery, where there is also a giant replica of the Champions League trophy, while the club's designated meeting point for fans has become increasingly raucous.

Highlights of the Reds' campaign were relived on stage at the designated meeting point, interspersed with some favourite chants and music by bands from the city.

A number of the fans appeared to have little interest in pacing themselves in the Kiev sunshine and could probably do with a good lie down if they are to make kick-off!

The giant Champions League trophy really knows how to work a crowd...May 26, 2018

One of the stranger sights at Taras Shevchenko Park, where the Liverpool event was taking place, was a man dancing to Liverpool chants dressed as Real Madrid star Cristiano Ronaldo.

Sporting a Portugal shirt and a mask of the five-time Ballon d'Or winner, the man behind the disguise appeared to find the whole situation hilarious when he revealed his true identity.

There was an unwelcome guest at the Liverpool fan park earlier...May 26, 2018

Things were far more sedate over at the Madrid fan park on the other side of the NSC Olimpiyskiy, albeit a little earlier in the day.

Organisers enlisted the help of a group of former players, including Roberto Carlos and Raul, to get their fans fired up for the final - it must be easy to get complacent at your third in a row!

But after the festivities of the day, the focus now switches to the real business on the pitch.