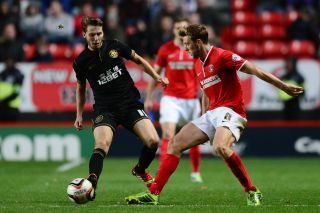 Owen Coyle did have something to be pleased about at the Valley, however, as his side picked up their first Championship point on the road since a 4-0 win over Barnsley on the opening day of the season.

Bradley Pritchard had the first chance of the match for the hosts but saw his shot from the edge of the area sail over the crossbar without testing Lee Nicholls – who replaced Scott Carson after the latter was injured in the warm-up.

In a game lacking chances it took Wigan until the closing minutes of the first half to have their first clear sight of goal, but Chris McCann failed to find James McArthur and the chance went begging.

Charlton began to apply pressure on their opponents in the second half and saw Dale Stephens miss two excellent chances to win the game.

After sending a strike whistling over the crossbar, Stephens had a second opening with seven minutes remaining but miscued his effort and Nicholls was not called into action.

The result leaves Wigan 14th in the table with 15 points, while Charlton move up to 19th.