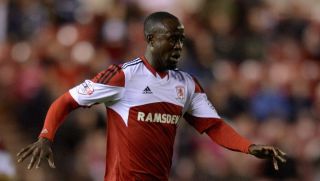 The former Boro captain was dismissed on Monday after three years at the helm and a run of just five wins all calendar year, but his side responded in the best possible way.

Mowbray's former assistant Mark Venus took charge and, having expressed an interest in taking the job full-time, did his chances of taking over no harm.

Albert Adomah's first-half double had Doncaster on the back foot from the outset and they had little answer after the break with Kei kamara and debutant Daniel Ayala also getting on the scoresheet.

The hosts attacked from the off and took the lead in the eighth minute.

Adomah raced on to a long ball over the top and lobbed the onrushing Ross Turnbull first time with a neatly clipped finish.

And the Ghana international had a second 10 minutes from half-time after stooping to head Richard Smallwood's cross into the ground and over Turnbull.

The points were wrapped up in the second half as Kamara bundled home another free-kick from the left, this time taken by Grant Leadbitter.

Jason Steele was called into action in the final 10 minutes, tipping Chris Brown's header onto the post, but Ayala thumped home a firm header just two minutes later to boost the mood on Teesside and Venus' job prospects.