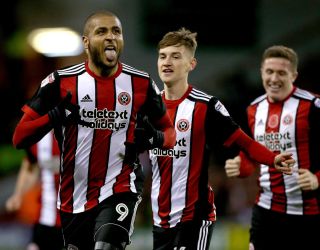 Sheffield United moved into second place in the Championship as four second-half goals from Leon Clarke led them to a thumping 4-1 win over Hull City at Bramall Lane.

The Blades leapfrogged Cardiff City in the table, who fell to a 2-1 defeat away to Bristol City, while Aston Villa's recent fine form was halted as Sheffield Wednesday left Birmingham with a 2-1 win.

Bolton Wanderers recorded just their second win of the season over Norwich City to move off the bottom of the table and Reading won 4-2 at Derby County in the day's highest-scoring game.

Sheffield United fell behind to Kamil Grosicki's long-range effort, but Clarke continued the Blades' remarkable start to life in the Championship, levelling the scores eight minutes after the interval.

After the 32-year-old tapped in to edge Chris Wilder's side ahead, Hull wilted and Clarke added two further quickfire strikes to double his tally for the season.

Unsurprisingly your MOTM this afternoon was the scorer of all 4 goals Leon Clarke. What a performance!  November 4, 2017

The win means Wilder's men have won seven of their eight league games at home this season and sit just two points behind Championship leaders Wolves.

Bristol City made it three Championship victories in a row as they saw off 10-man Cardiff City at Ashton Gate.

Callum O'Dowda gave the hosts the lead, only for Omar Bogle to level before the break.

Bogle was then shown a straight red card for a late tackle and further punishment was meted out when Aden Flint netted a winner to inflict just a third league defeat of the season on Neil Warnock's side.

John Terry suffered a broken metatarsal in his foot during the home defeat to Sheffield Wednesday.

The former Chelsea captain picked up the injury after just 21 minutes and after the game boss Steve Bruce confirmed that he would be out for some time.

Goals from Adam Reach and Jordan Rhodes secured only the Owls' second away victory of the season, which brings to an end Villa's unbeaten home record.

Sunderland's miserable week continued as Bolton's win over Norwich dropped them to the foot of the table, ahead of Sunday's derby with Middlesbrough, while two late goals for Brentford secured a 3-1 win over Leeds United, who have lost six of their last seven league games.

In the day's other games, Burton Albion secured a 1-0 win away at Millwall and Nottingham Forest thrashed Queens Park Rangers 4-0.