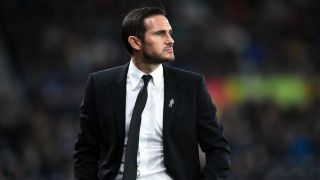 Derby County stormed to a comprehensive 4-1 victory over West Brom at The Hawthorns as Leeds United returned to the top of the Championship.

Frank Lampard's side are now level on points with West Brom, two behind leaders Leeds, who beat Ipswich Town 2-0 at Elland Road.

Preston North End came off better in a seven-goal thriller against Brentford, while Nottingham Forest saw off Bolton Wanderers.

Jay Rodriguez's early error enabled Jack Marriott to set Derby on their way, and Lampard's side did not look back – Tom Lawrence, Harry Wilson and Scott Malone having them 4-0 up by the 71st minute.

Sam Johnstone had to be in fine form to spare Darren Moore's team further humiliation, pulling off top saves to deny Tom Huddlestone and Jayden Bogle.

Rodriguez atoned somewhat for his mistake with a neat finish late on, but it was a mere consolation as the Baggies slumped to a second straight defeat.

BIELSA BACK ON TRACK

Leeds took advantage of West Brom's humiliating defeat to return to winning ways – and the top of the league – with a routine victory over lowly Ipswich.

A run of just one win in five Championship games had seen Marcelo Bielsa's side drop to fifth, but there was little doubting the Whites from the moment Kemar Roofe headed in their opener.

Liam Cooper's stunner at the culmination of a well-worked set-piece put Leeds in complete control, and only the woodwork prevented Ezgjan Alioski adding further gloss.

The victory moves Leeds level on points with both Middlesbrough and Sheffield United, with Bielsa's side top courtesy of goal difference.

It is now seven league games without a win for Brentford, as new manager Thomas Frank's search for a first point goes on, although it was not for a lack of trying at Deepdale.

Three goals in the opening 23 minutes put Preston – now unbeaten in four – in control, but Brentford rallied through Sergi Canos and Ollie Watkins.

The comeback was not to be completed, though, with Callum Robinson's second of the game enough to claim the points, despite Neal Maupay's late consolation, and move Alex Neil's side out of the relegation zone.

Another outstanding performance from tonight, who deservedly collects the 's man of the match! October 24, 2018

Nottingham Forest finally ended their long wait for a win at Bolton as Lewis Grabban scored twice – after missing a penalty – to help claim a comfortable 3-0 victory.

Joe Lolley's strike opened the scoring, and although Grabban saw his spot-kick saved early in the second half, he found the target eight minutes later to double Forest's tally, before putting the result beyond all doubt from 12 yards late on.

It represents a first win at Bolton for Forest in any competition since 1991, when legendary Brian Clough was at the helm.