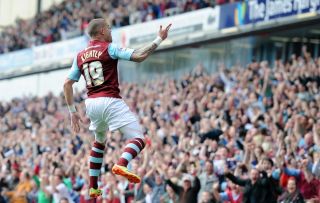 Sean Dyche's men knew victory at home to Wigan would secure a return to the top flight regardless of the result in third-placed Derby County's match with Barnsley.

Burnley last played in the Premier League in 2010 but are now assured of promotion alongside Leicester City, who will be crowned champions should they beat Bolton Wanderers on Tuesday.

A pitch invasion followed the full-time whistle in Burnley's clash with Wigan as home fans showed their appreciation and delight.

Derby were 2-1 winners against relegation-threatened Barnsley, with Jeff Hendrick and Johnny Russell on the scoresheet for Steve McClaren's side.