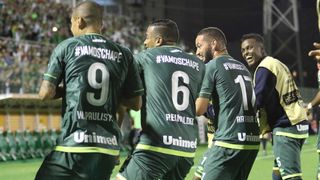 Chapecoense's revival continued after the grief-stricken Brazilian side won the Santa Catarina state championship on Sunday.

It has been a time of mourning and rebuilding for Chapecoense since a plane carrying the Brazilian squad, technical commission and a number of journalists for the first leg of the Copa Sudamericana final against Atletico Nacional crashed en route to Medellin two days before the match was due to take place, killing 71 people on board in November.

Only three members of the travelling squad survived - Neto, Alan Ruschel and Jackson Follmann – as Chapecoense were left heartbroken and struggling to field a team.

However, Chapecoense's resurgence continued on the weekend as the tragedy-struck team – who claimed the second stage of the competition last month with a match to spare – retained their Santa Catarina title which they won in 2016, despite losing 1-0 at home to Avai on Sunday.

Leandro Silva's first-half goal ensured the play-off final – pitting the stage one winners against the stage two champions – ended 1-1 on aggregate but Chapecoense's superior regular-season record ensured they got their hands on the trophy.

"This title means the result of the work of those who have already been part of the work. We always walk together. The title is also theirs," Chapecoense president Plinio David de Nes. "We started writing a new story, after what happened. But it's theirs, too."