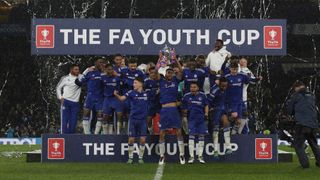 Chelsea and Premier League champions Leicester City will field sides in the new EFL Trophy, but Arsenal, Liverpool, Manchester City, Manchester United and Tottenham have not taken up the option.

Championship outfit Newcastle United also rejected their invitation, with six other second-tier clubs instead filling the unaccepted berths with their academy sides.

Sixteen 'category one academies' were invited to take part in the competition against League One and League Two clubs for the competition, in which invitees must name at least six Under-21 players in their starting line-ups.

English Football League (EFL) chief executive Shaun Harvey said: "Now that we have finalised what has turned out to be a longer than expected invitation process, we can start to work with our clubs and invited sides to ensure everyone gets the maximum benefit from being involved.

"Whilst it's disappointing not to have some of the Premier League sides involved in this season's competition, they were all appreciative of the opportunity to participate and could see how the EFL Trophy would benefit their squads in the long term.

"But it ultimately came down to a question of scheduling. We are forced to play this competition during international breaks. Many young Premier League players are away with their respective countries during these periods and this understandably led to a number of questions about availability and squad strength.

"There were also a number of sides who have already committed to sending their players out on loan for the period in which the games will be played and were reluctant to renege on those agreements, which again I understand and respect."

The new 64-team tournament, which is being trialled for one season, is split into 16 regionalised groups featuring at least one representative from each of League One and League Two.

The top two teams in each pool reach the knockout stages, with the final to be played at Wembley in April 2017.